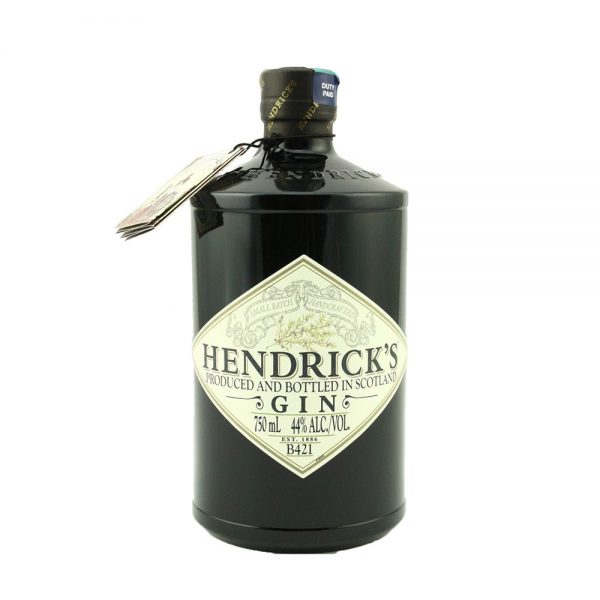 Hendrick’s Gin is a brand of gin produced by William Grant & Sons at the Girvan distillery, Scotland, and launched in 1999. In addition to the traditional juniper infusion, Hendrick’s uses Bulgarian rose and cucumber to add flavour. Hendrick’s gin is bottled in a dark brown, apothecary-style bottle.

Hendrick’s uses a blend of spirits produced from a Carter-Head Still (constructed in 1948), of which there are only a few in the world, and a small pot still, built in 1860 by Bennett, Sons & Shears. Both have been restored to working order after being bought at auction in the 1960s by the former William Grant Life President, Charles Gordon. The two stills produce strikingly different styles of gin due to their different construction and methods of distillation.

The pot still is generally referred to as the Bennett still. The still is quite small, which allows most of the botanical flavour characteristics to pass into the spirit. The still is filled with neutral spirit, and the botanical recipe added with some water. This is left to steep for 24 hours, which begins the process of extracting the flavour from the botanicals.

The still is then heated by an external steam jacket to boil the liquid. As the pot begins to boil, vapour moves up the short column of the still to the condenser, where they condense and are collected. First runnings can be as high as 92% alcohol, with a gradual decrease in the strength as the distillation progresses. Once all of the alcohol is collected, the final spirit will be approximately 75% alcohol v/v. This spirit is heavy, oily, and smells strongly of juniper.

Be the first to review “Hendrick’s Gin/亨利爵士金酒”